Update to the ARD saga "Winery Wader"
Broadcasting dates: ARD on 22nd and 29th November 2019 at 20.15 hrs each time
Filming for episodes 3 and 4 "Weingut Wader" finished.
Next episodes in planning.


Peace has returned to Schlossgasse 100 in Hambach. The shooting for the third and fourth episode of the ARD family drama "Weingut Wader" is done and the film crew travels to the next location.
At the press conference at the end of the filming it is possible to imagine the amount of people and material required for such a film project.

The new episodes will be shown on ARD in autumn.

In autumn 2017 and summer 2018 Neustadt an der Weinstraße and its wine village Hambach were the shooting location and film backdrop for the ARD episode "Weingut Wader". The feature film belongs to the new ARD series "Endlich Freitag im Ersten". The film was shot with the participation of many citizens of Neustadt as extras. The broadcast dates are November 2 and 9, 2018.

A heavy blow for the passionate winemaker Anne: Her life's dream of following in her father's footsteps at the Winery Wader threatens to burst. When the patriarch dies unexpectedly, a serious omission takes revenge. The last will and testament, which is supposed to transfer the traditional family business seamlessly into Anne's hands, is missing the signature!

Instead of taking over the estate as sole boss, Anne has to share the inheritance with her brother Matthias and her mother Käthe. The fact that the two announce that they will sell their shares to the highest bidder pulls Anne away the floor under her feet. The single parent must now decide how to proceed for her and her blind daughter Tori. Fight, wait or start over somewhere else?

The situation gets even worse: her father's arch-enemy, Albert's brother Bruno, wants to take the parents' house and the vineyards under his nail. The fate of the estate is now in the hands of Käthe. Their decision is not only about money, but also about family secrets and a deep hostility.

On June 6, 2018, the first flap of the second film "Weingut Wader" with Henriette Richter-Röhl as Pfälzer Bio-Winzerin Anne Wader in the leading role fell in Hambach an der Weinstraße. Anne discovers an old family secret and has to realize that a momentous misstep from the past shakes the whole family to its foundations ... In Henriette Richter-Röhl's second film Leslie Malton, Caroline Hartig, Max von Pufendorf, Jürgen Heinrich, Sebastian Fräsdorf, Kyra Sophia Kahre, Judith von Radetzky, Ines Lutz, Adnan Maral, Tobias van Dieken and many others play alongside.

"Winery Wader" is a U5 film production on behalf of ARD Degeto for Das Erste. Producers are Karl-Eberhard Schäfer and Norbert Walter. Diane Wurzschmitt and Stefan Kruppa (both ARD Degeto) are the editors. It was directed by Tomy Wiegand. The film was shot in October and November 2017 and in June and July 2018 in Hambach an der Weinstraße and surroundings, Ludwigshafen and Mannheim. 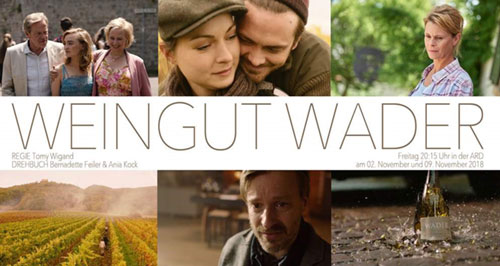